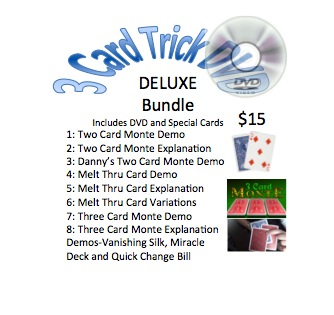 SKU:
$15.00
$15.00
Unavailable
per item
Three great card tricks with a DVD explanation.
The Two Card Monte is made with special Bicycle Brand Playing Cards. The Three Card Monte is made with special cards (not bicycle-but premium) as well.
1: Two Card Monte - A great guessing game where two cards are shown front and back. The magician takes one card and cleanly places it behind his back. The spectator saw the card, guess, but gets it wrong every time! The card they thought went behind the back is still in the front!
2: Three Card Monte - Three cards are shown face up, you ask the spectator to take the middle card, say in this case a three of hearts out. They slide the card out, when they flip it over, it is a completely different card. When you show the other two cards, there is no three of hearts anywhere!
3: Melt Thru Card - a red card (or what ever is with your set) is placed between two blue cards (or what ever is with your set.) You give the cards a little shake, and the red card visibly moves to the bottom of the stack, then another shake, and it goes back! A great illusion.
Add to Cart 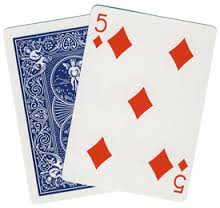 As always, if you have any questions, email me at mrdmagic@yahoo.com
Mr. D and Up Your Sleeve Magic Feature EASY TO DO Magic! Also, contact us for Magic Shows!
Proudly powered by Weebly